A man died on Sunday in a road traffic accident. Somebody’s father, somebody’s son, somebody’s brother and somebody’s lover. A family has a hole ripped through the centre of it and that is the biggest tragedy of all. He was my friend, but long before we became friends he was my muse. His art inspired my art. He changed my life and I can never thank him enough.

5 years ago, when I was teaching, I was earning a lot and spending a lot. I poured my dissatisfaction with life into shopping. I bought expensive clothes mainly. Clothes that made me look happy and successful. Once a month I went to the theatre with a friend and we’d book front row seats, then we’d go chat about school over too many bottles of wine. One month I booked to see Matt Bourne’s Swan Lake. We imagined it might be a bit different as we didn’t often go to see ballet. By the interval my friend and I were speechless. The beauty of the dancers, the strong narrative, the symbolism, the passion, the power, the masculinity, the sweat – it was so moving on so many levels. After the finale, we sat in the wine bar with no thoughts about school. We felt as though we’d seen something life changing.

From that moment, I couldn’t get the show out of my mind. I booked to see it again and again and again. I followed it around the country. I tried to make sense of why it was so important to me. Perhaps the story chimed with my own – a prince trapped in a cold and dutiful life finds meaning in the wild soul of a swan. Perhaps it was the sheer physicality of the show – fifteen beautiful topless men thundering around the stage. Perhaps it was Tchaikovsky’s heart wrenching strings. Somehow seeing it again and again didn’t sate me. I had all these emotions stirred up in me and they had nowhere to go. I did something I hadn’t done in years…..I picked up a paintbrush and I started to paint images of the show. I needed to get them out of my head. I needed to interpret them on canvas. I was rusty but I was really rather pleased with the result. 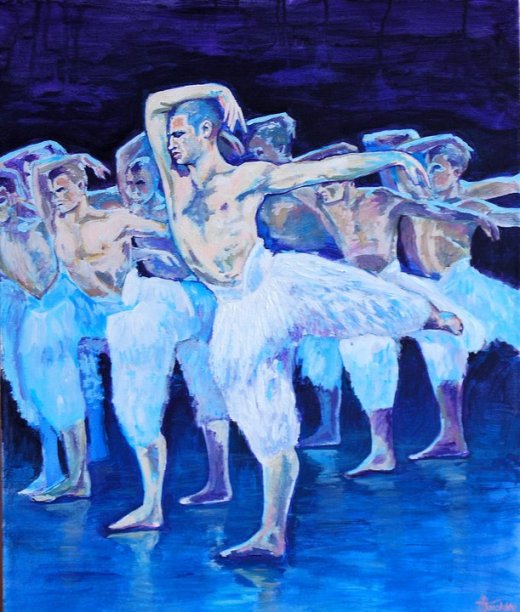 On my tour of Swan Lake I had told a friend in London we were going to see the show in Wimbledon – no ifs or buts, she must see it. By this point I was an expert on cast names and when she swooned at the principal swan, I whispered, 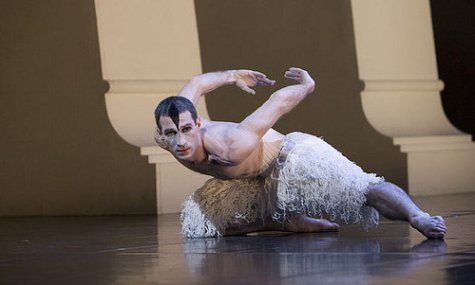 My apologies, I dont know who to credit for this picture. I hope they won’t mind me using it,

He was magnificent, mesmerising. It was impossible to look anywhere else when he was on stage and when he was The Dark Stranger after the interval, well, lets just say he raised the temperature in the whole theatre. After the finale, I looked at my friend wiping away tears and offered to buy her a drink over the road.

The pub was packed and we were astonished and delighted to see cast members wandering in and ordering beers. We tried hard not to stare. Then Jon sauntered in and we nudged each other. The Swan was just a few feet away. I could have thrown my beer mat at him. We giggled like school girls,

“No, you say something!”

Two professional women reduced to quivering wrecks –  it was shameful. Finally, on the way out for a smoke I plucked up the courage to tap him on the shoulder and shake his hand. I gushed something about how fantastic he was. He smiled and thanked us kindly. There was no aloofness, no weariness in his tone to suggest we were interrupting his quiet, after-show pint. He seemed genuinely touched that we had congratulated him. It struck me then how a man with that much beauty, talent and success could be so nice and kind and, well, just normal.

I decided my next painting would be a study of Jon as The Swan, only this time, I was going to go for oils. They are tricky, oils, if you’re not used to them. They take a bit of mastery, but the warmth and depth you can get from them so superior to Acrylic. I decided Jon was worth it. 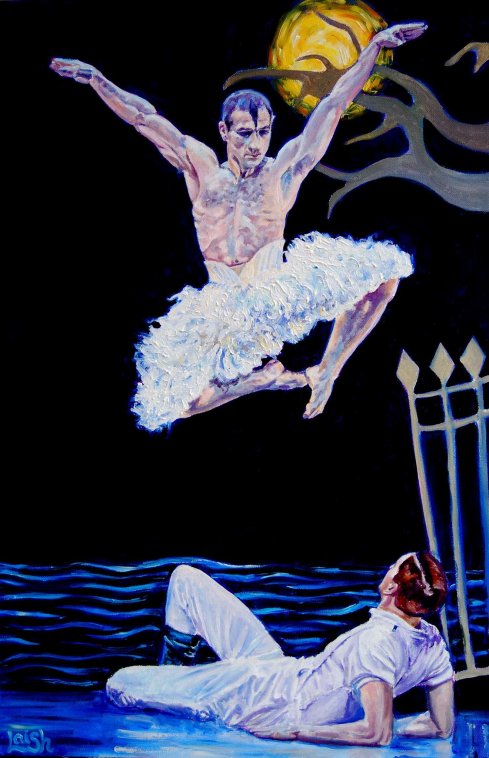 I was really pleased with the result. Really pleased that I’d captured the light and movement. I wanted to show someone. I tentatively put it on Facebook and got a lot of love for it. I plucked up the courage to send Jon a link and cringed a little bit inside. I worried he might think I was some crazy obsessive fan. (I worried I might be turning into some crazy obsessive fan!). He was so very lovely about it. He shared it on his page and even linked it to mine! Suddenly I had his fans approaching me about painting something for them. It had been many years since I had considered myself a professional artist, capable of selling work. It was such a surprise to find people wanted my work. A seed began to grow in my mind that maybe I could live on my creative work. It was only a dream at that point.

I got so many commissions and fans from this painting I decided to give it to Jon as a present. I owed him and I wanted to thank him. We arranged a handover while I was on a school trip with some sixth formers in London. He came over to The Baden-Powell to meet up there. I imagined he would thank me, shake my hand, we’d exchange a few pleasantries and he’d be off. Instead he sat down, had a coffee with me and my colleague and chatted for over an hour. He was funny and charming, interested and interesting and really delighted with the painting.

It was through Jon that I met another inspirational person. Clare, who lived in Newcastle was similarly devoted to Swan Lake generally and Mr O specifically. She also had been inspired and had also found new passions as a result of the show. I created a painting for her and rather than post it, she invited me to visit and catch a show with her. We became friends. She was and remains and incredibly encouraging person to me. She helped me to have confidence in my work. I remember saying to her how much I’d like to do a study from life of Jon. She told me to just ask him. So I did…..and he said yes! 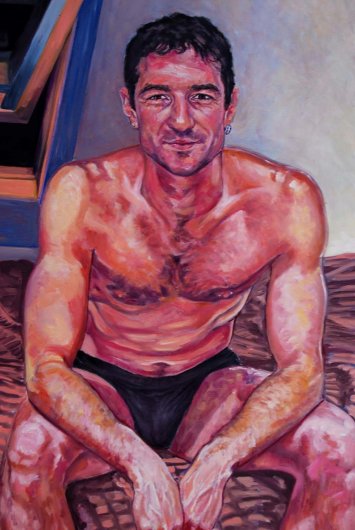 When he had finished his tour of Swan Lake and was rehearsing for Dirty Dancing, he invited me over so that I could make some preliminary sketches for this portrait. I was so very nervous. I have always been great at life study, but I was plagued by the anxiety of sitting in front of this immensely talented artist and drawing like a three-year old with a crayon. As it happened, I didn’t let myself down. I remember being amazed at how battered his poor feet were. He listed all his injuries as I sketched. When you see ballet dancers moving like silk, you just don’t imagine how brutal it can be on their bodies.

My portrait doesn’t show the long lines and grace of his body that most depictions quite rightly focus upon. In my painting he’s hunched over and his legs are foreshortened. In my painting there is the slimmest crease at his stomach where he is bending over, rather than showing his immaculate abdominals. In my painting Jon is just a man relaxing. Jon never said one way or the other whether he liked the painting which caused me to fret that he must hate it. I realised later he just didn’t think it necessary to make a judgement. I’ve heard other artists who studied him talking of similar experiences. Jon just let you get on with what you thought was best.

For a couple of years, Clare and I would meet up for ballets. If we couldn’t get to see a Matt Bourne we’d go and see something else, but we were always most eager to find whichever show Jon was in. He’d always meet up after the show and frequently drink with us into the small hours. We got to know Jon’s mum, Paula and met up for lunch if we were at the same shows.

I think that in getting to know such diverse people and particularly a dancer like Jon, it made me think that there were other ways to live a life. I didn’t have to carry on teaching. It was possible to lead a more creative life. In 2012 I resigned from teaching and began training myself as an illustrator. The downside of this was I no longer had the money or holidays to travel the country to see shows. I saw a lot less of Clare and Jon and Paula and I lost track of what was on at the theatre. In April, Clare invited me up to Newcastle to meet up with Jon and watch him in Carman. I didn’t have the cash to get there, but thought, never mind, I’ll get to see everybody again once the finances had evened out.

On Sunday afternoon Paula phoned me with the news that Jon’s motorbike had been hit by a car on his way to Sadler’s Wells and Jon had died at the scene. Somehow she’d found the strength to call all his friends to inform them before the press release. I have been unable to find a way to deal with the news. Partly, I don’t think I have a right to express grief when there are so many of Jon’s  close friends and loved ones in so much pain. The dance world is reeling at the loss of such a bright star and obituaries talk of his impact on ballet in bringing new audiences to the art. If I can add anything to what has already been said it is that he was my inspiration and I owe him more than I could possibly express here.

I can’t quite believe that I’ll never see that exquisite dancer perform again. I can’t believe he won’t be sat there after a show making us giggle. I keep playing old YouTube clips but they suddenly seem very abstract. Yesterday however, I found this beautiful little film of him. It broke my heart